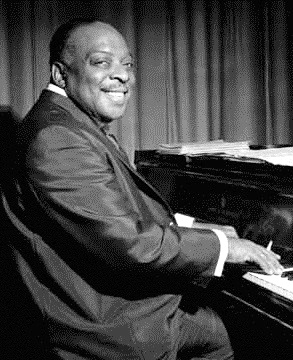 William Basie was born in 1904 in New Jersey. In the early 20's he moved in Harlem where he discoverd the great stride pianists. His meeting with Fats Waller made a great impression on him : the latter learned him the organ basics when the young Basie used to listen Fats Waller playing at the Lincoln Theater. His career really took off in 1936 when he joined the Bennie Moten big band, and became leader of the group after Moten's death. The band is renamed "Barons of Rhythm" and begins to record several titles for Decca label from 1937. Basie's qualities in composing and arranging pushed the group to the rank of best big band of that time. In January 1938, Basie's orchestra played at the Carnegie Hall, the legendary concert hall where Duke Ellington and Benny Goodman already played.

Subsequently, Count Basie recorded a great number of sides under his name and with several singers as Frank Sinatra. His collaboration with Oscar Peterson was also very prolific since they recorded about ten discs together. Basie's minimalist and smart playing, his impeccable swing and his skills as a conductor made him one of the major personalities of Swing era.